Where on earth is Carmen Sandiego?

What the heeeellll, it's been so long!  But not because I haven't been busy drawing, just that I've been lazy uploading it, or it's sucked!  I have a backlog to scan and show off, but I'm leaving for India tomorrow and I just couldn't end the year without saying something.  In the meantime, I've started a Tumblr!!  Go check it out, there's a load of work that I haven't posted here yet!! 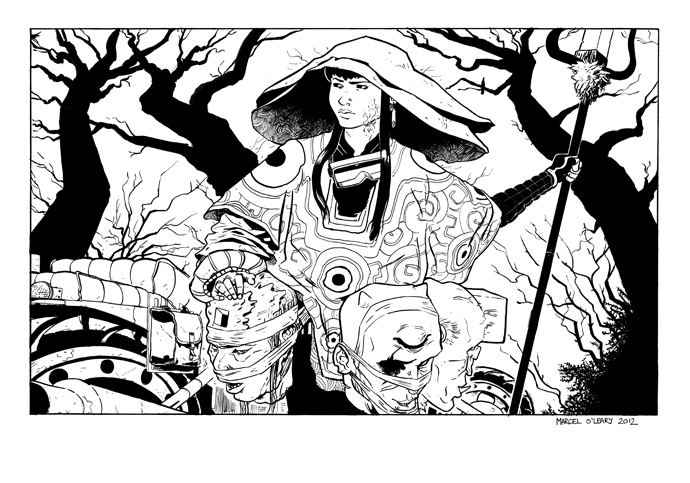 Here's a piece that I've made as part of Patrick Crotty's venture for Helsinki Comics Festival.  It'll be made into a Risograph print and sold alongside other amazing prints too.  Patrick's organising a small Sci-Fi comic anthology, and he's got some damn good people working on it (including the man himself!).  I'm pretty excited to be a part of it!  More news on it soon.

The picture originally had a throwaway concept to it, but as I was drawing it I fleshed out the story more in my mind.  I might write some more for this lady when I've finished work on my current comic project.  I was going to add the quote "History will be kind to me, for I intend to write it", since I love the ambiguity of it in a narrative sense, but since it's a Churchill quote I just feel a little uncomfortable about it!

So last winter I worked on the first issue of a book called (you guessed it) Dannyland with the inestimable Nate Simpson on writing duties.  Unfortunately it didn't work out as a long term project, but I learnt a million things and more from the guy.  Here are some highlights from the first issue- the logo design and tones are largely placeholders, hence the inconsistency.  I don't think I was really mature enough for the responsibilities  of working on the book, but that's something I've improved on since!  Maybe someday I'll show some more art from this project. 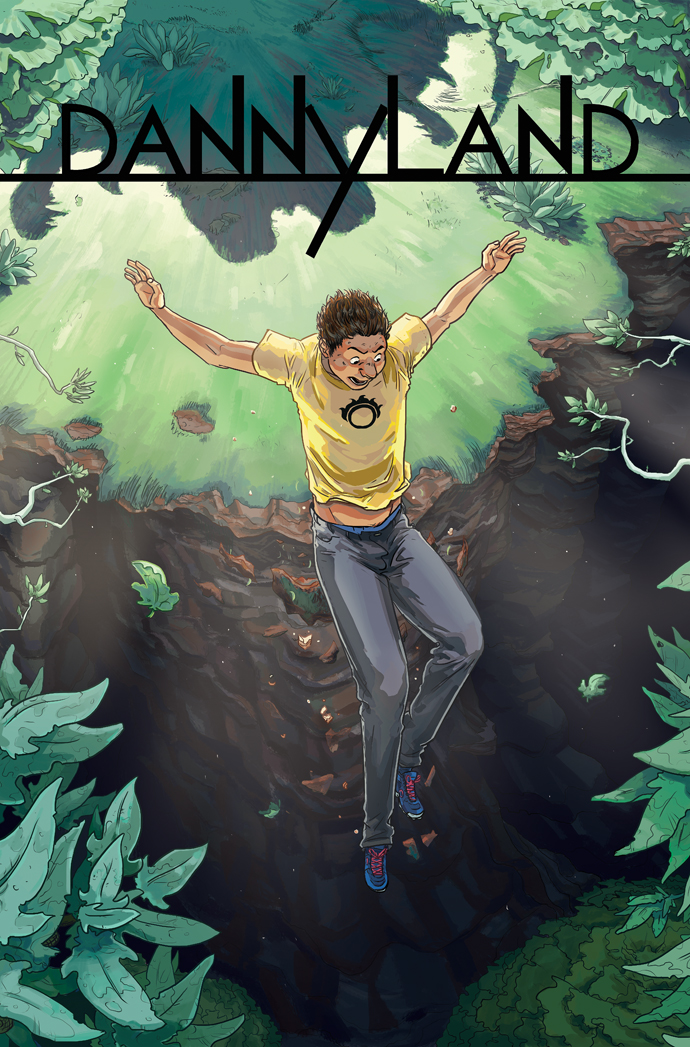 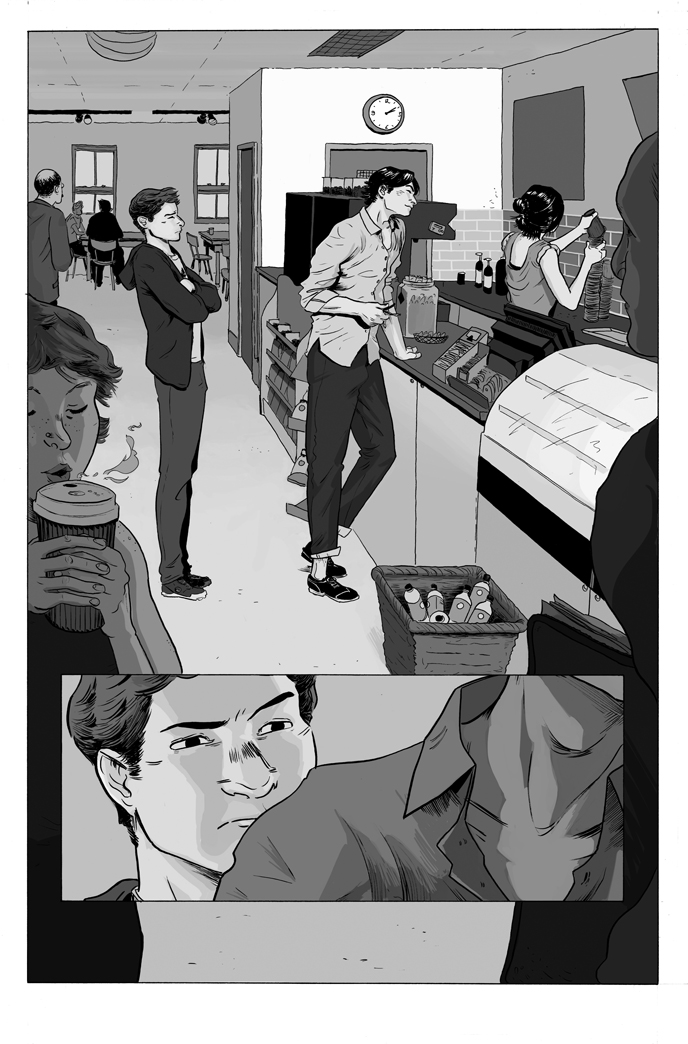 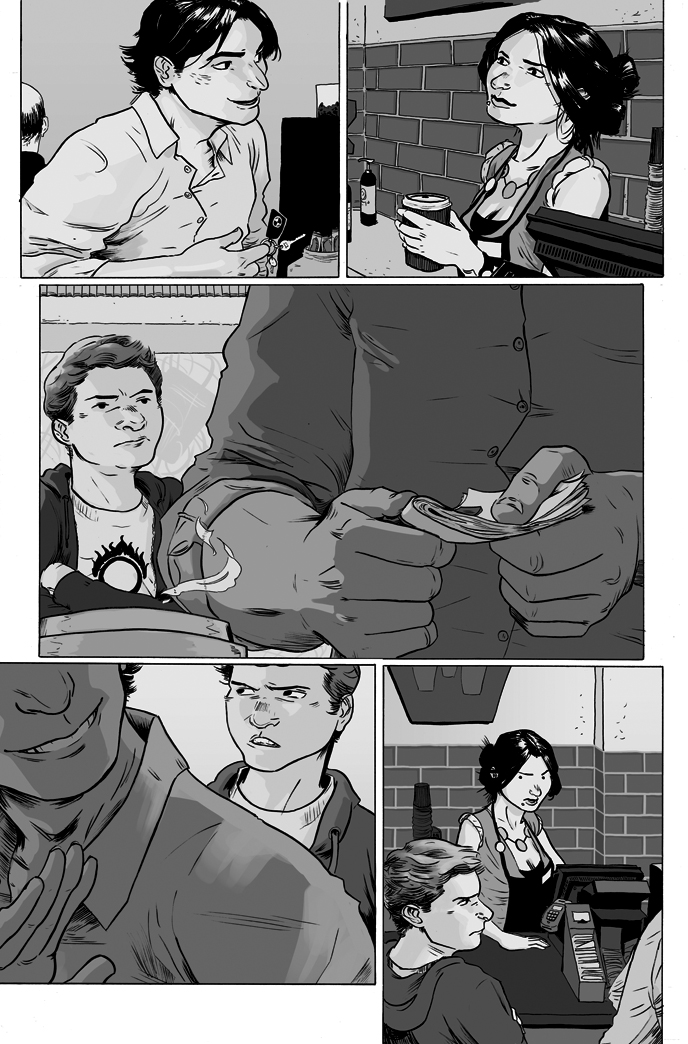 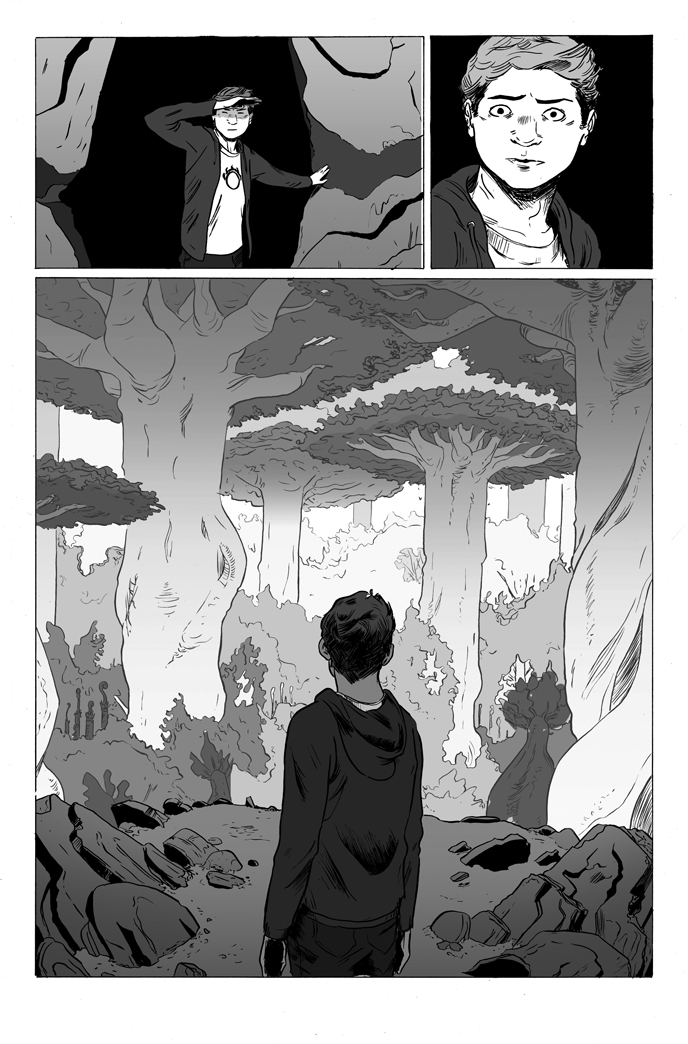 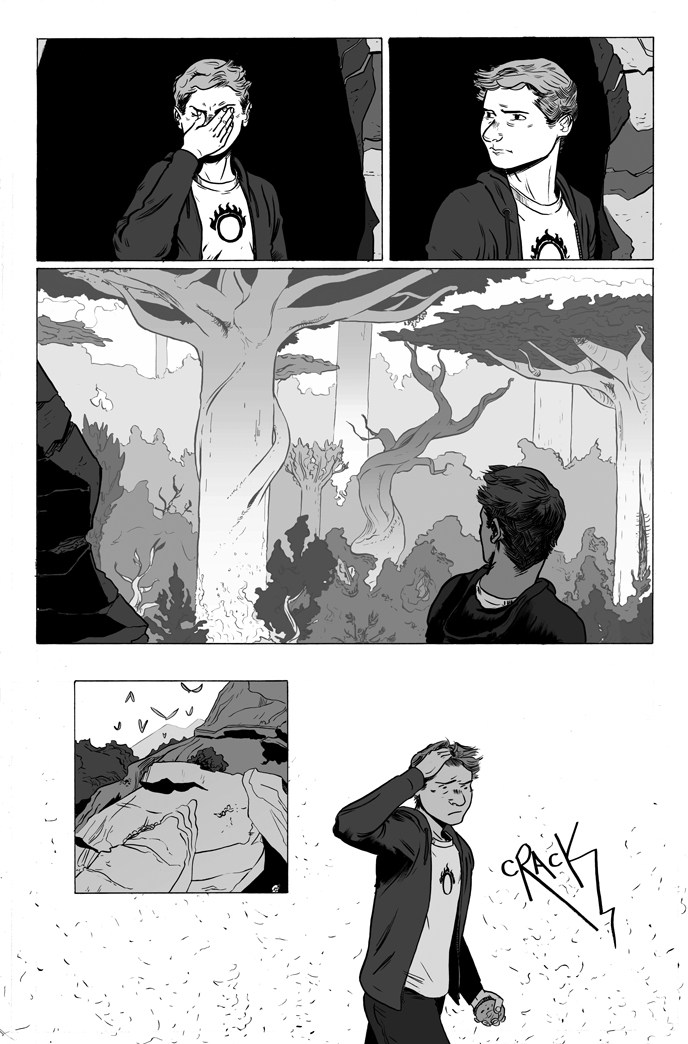 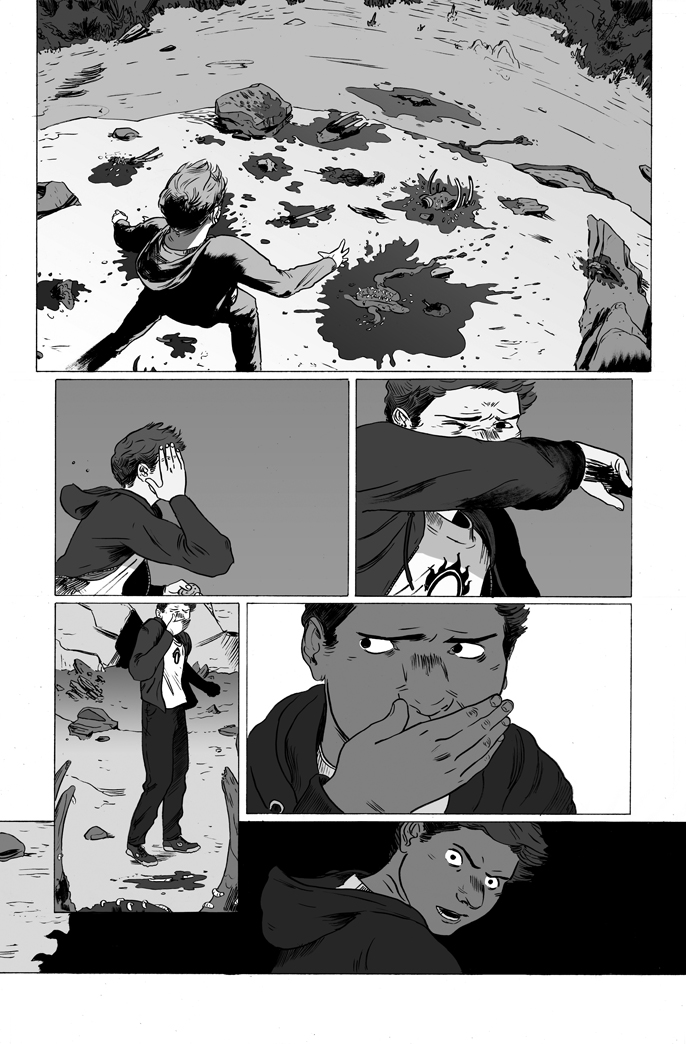 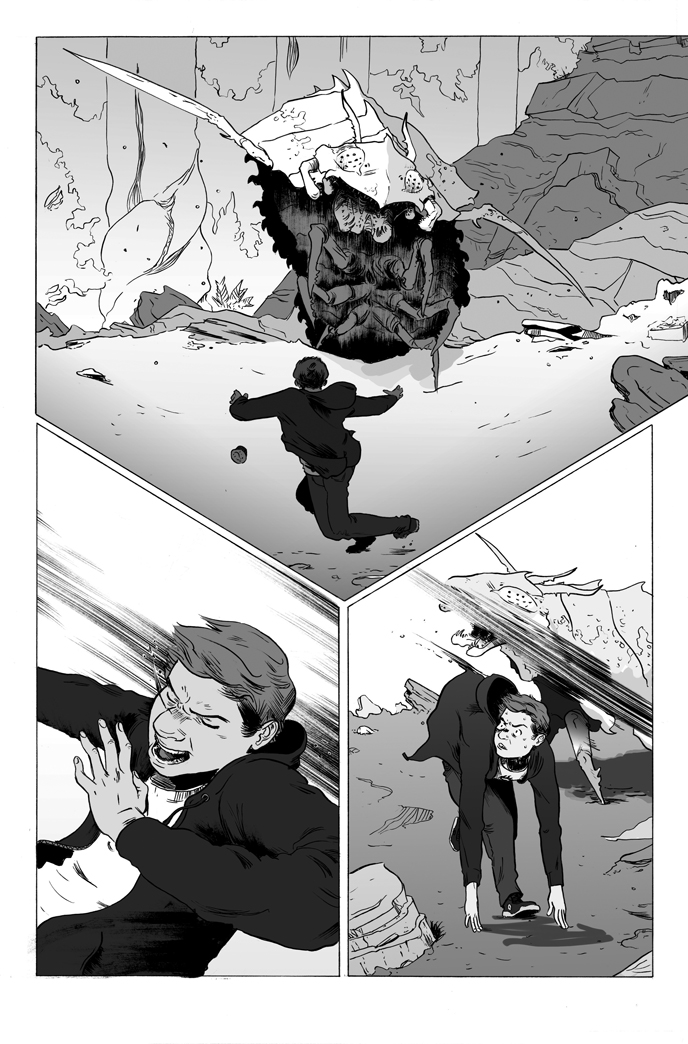 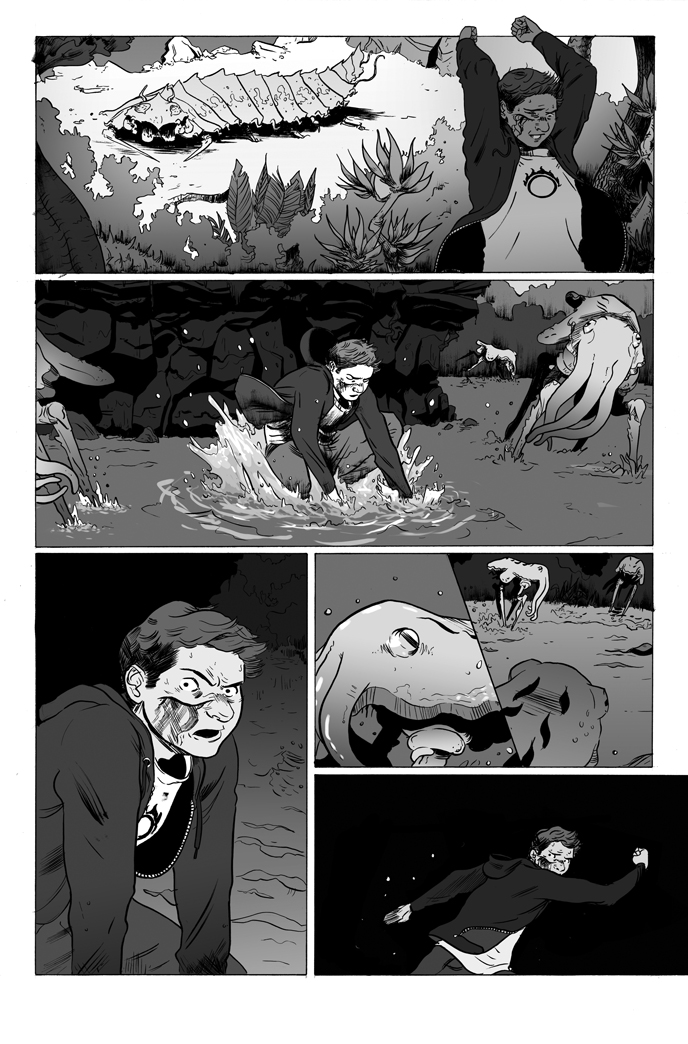 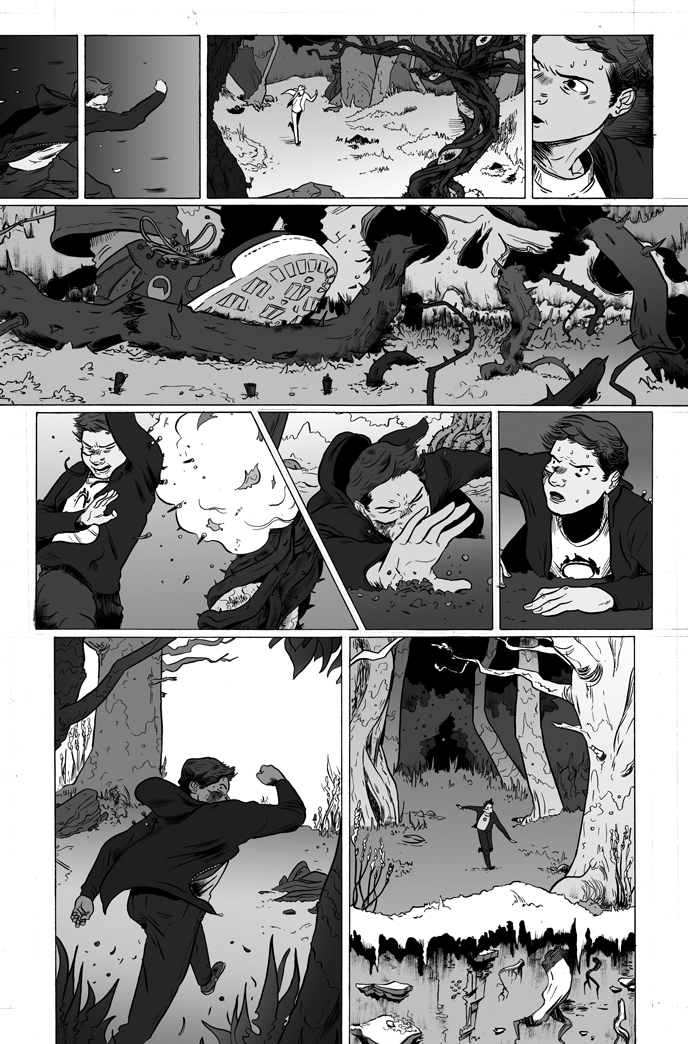 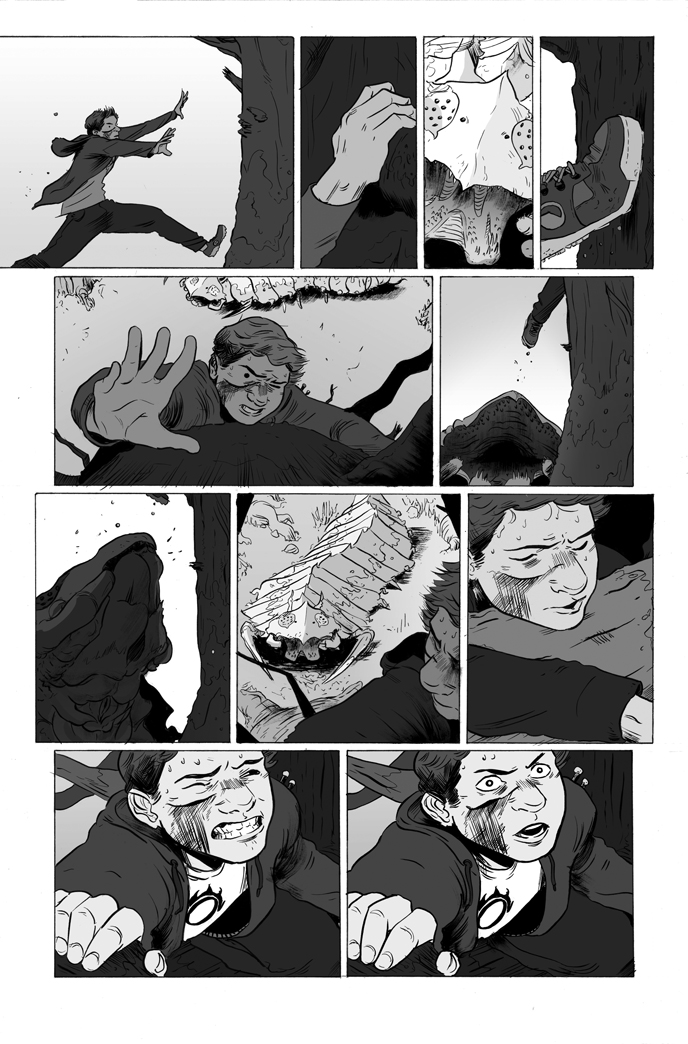 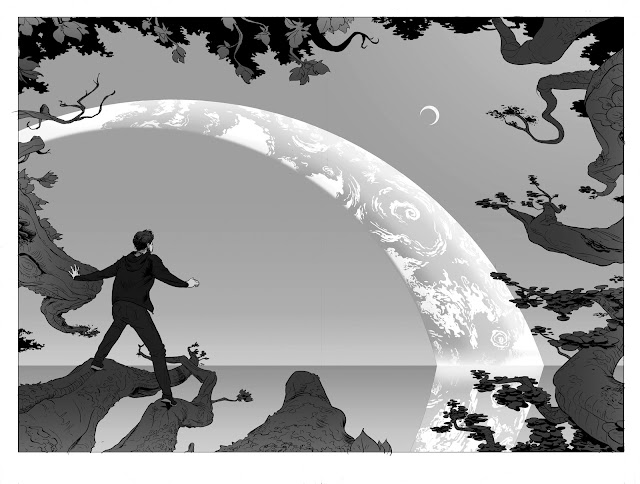 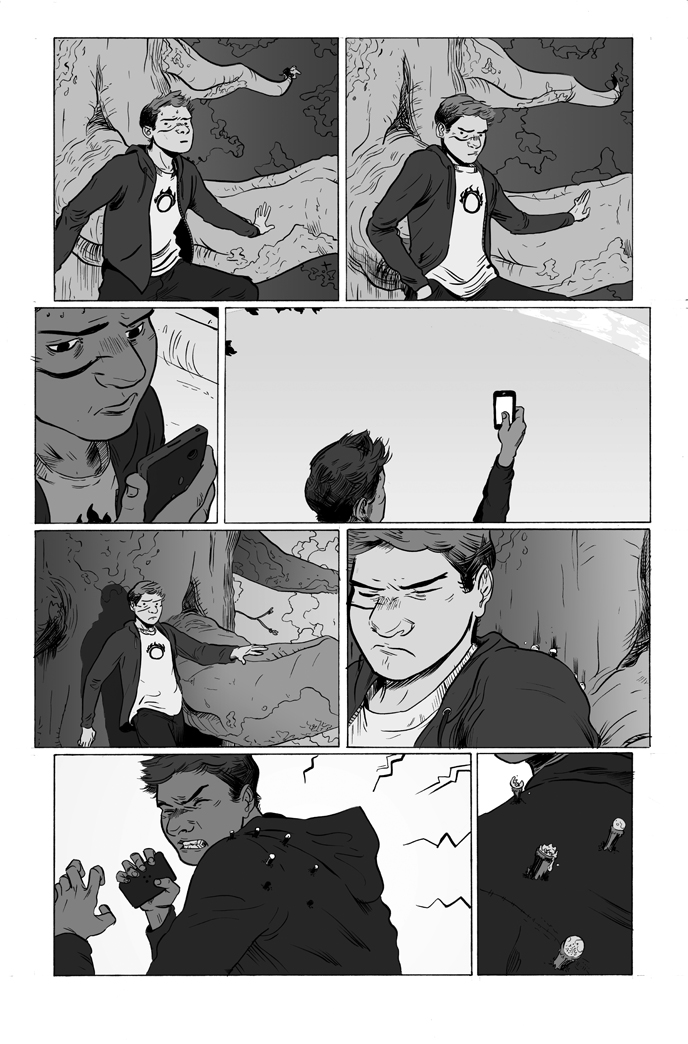 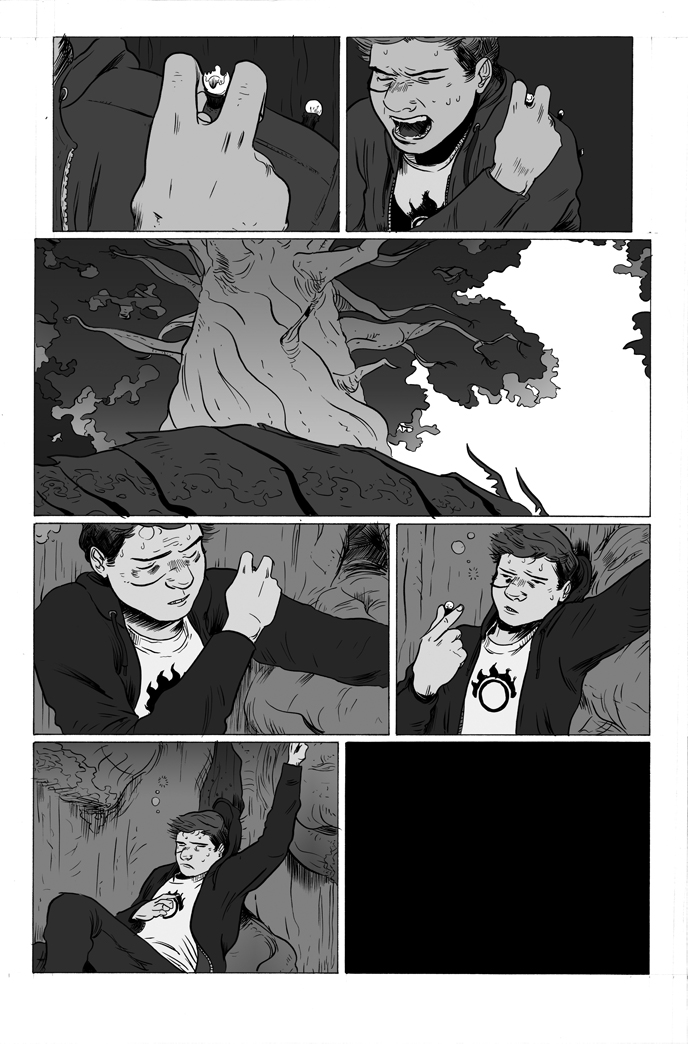 Useless fact- the first page of the book in the coffee shop scene, has a couple of obscure likenesses in the top right corner, mainly to entertain myself- Joe Sutton, Joe Keatinge, and uh, Tobias from Arrested Development...
Posted by Marcel at 13:17 No comments:

"In Heaven, an angel is no one in particular..." 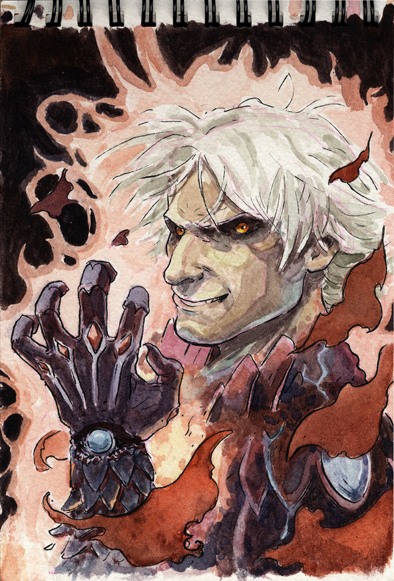 Here are a couple more watercolour paintings- one was a Devil May Cry pic for my good friend Harry, and the other was a painting during life drawing (so life painting...?).  The simple application of paint/colour in the pic is something that I've found hard to do since!  I think it took around 10 mins, and they're both on 6x4 inch paper. 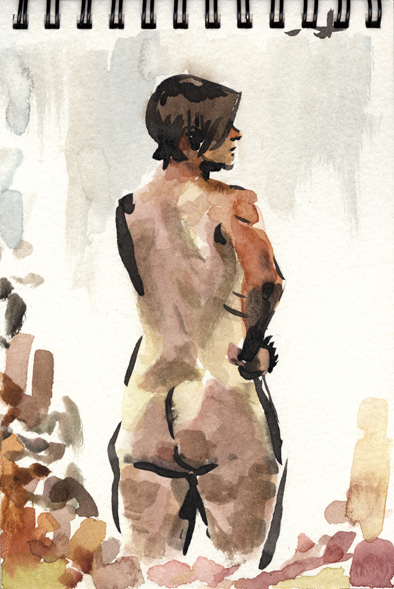 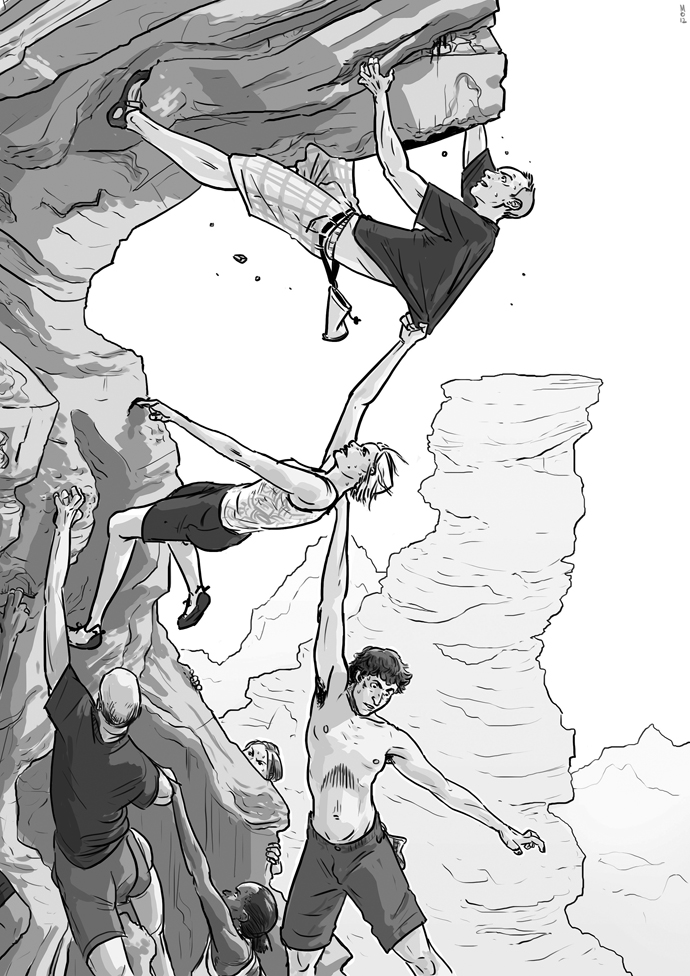 A buddy of mine is leaving the country to move back home to South Africa, so I drew him this.  Realistically I don't know him too well, but he's generally been an amazing guy, and since he's one of SA's best boulderers, the inspiration was pretty obvious!  I'm a big fan myself, but until recently hadn't climbed in about 6 months.  Oh, how my hands ache now...
Posted by Marcel at 00:56 No comments: 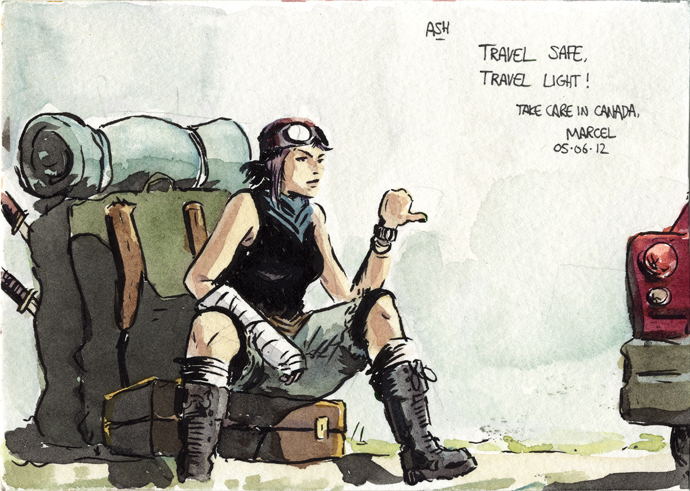 I've been trying out watercolours when I can.  In the past, I'd worked under the assumption that I couldn't use colour very well, but in actual fact I can use it fine, I just take a while picking colours.  So using watercolours in small sketchbooks has been really fun to experiment with. 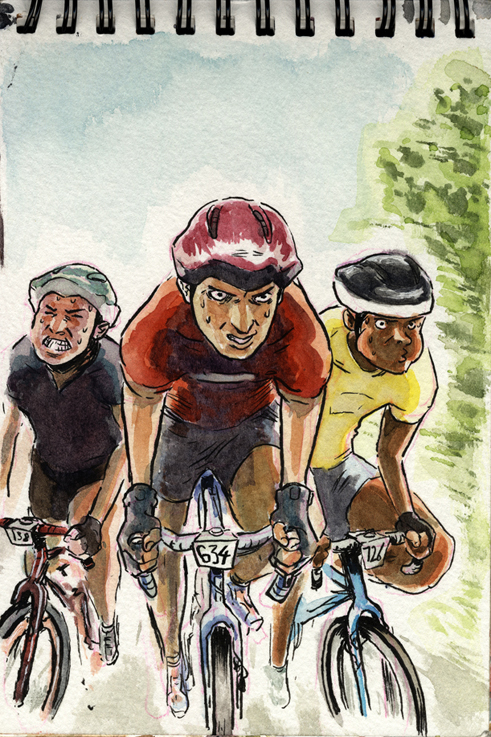 My housemate Jan recently moved out, and went to cycle on the Etap stage of the Tour Du France, when it's closed off for the public to use before the competition itself.  He's a cycling machine!

Here's a load of Life Drawing that I've done.  Since these, I've tried to only really use ink brush-pens for my life drawing, just to get out of the habit of relying on line alone and work more on tone and shape/volume instead, but it feels pretty weird to be bad at it compared to what I'm used to from my pencil work.  Fun though!

On a similar note, I'm in love with these two observational sketches from Glen Keane.  They're so sweet!  The colour, form and gesture just seem spot on, like you can instantly see the girl's walk and personality.  Time to practiccee

First up, a meme based piece- "Draw yourself as the last videogame character you played as" or something. This was mainly an experiment with glows and motion blurs, stuff I normally shy away from! 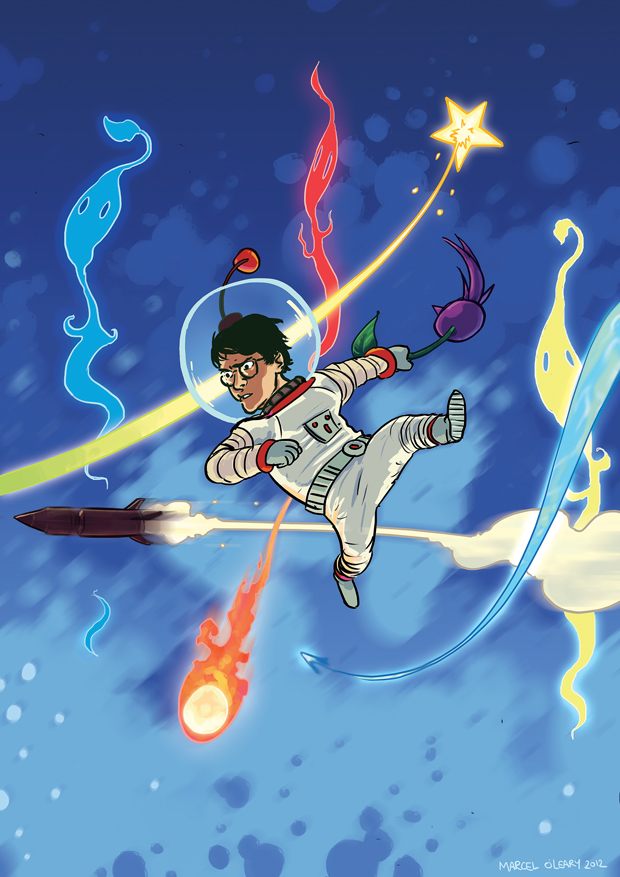 Aaaand this piece was a self portrait for a company I work for: 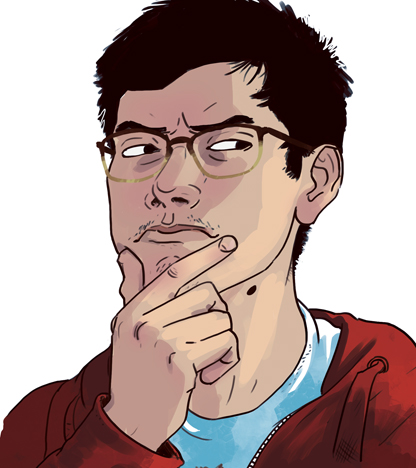 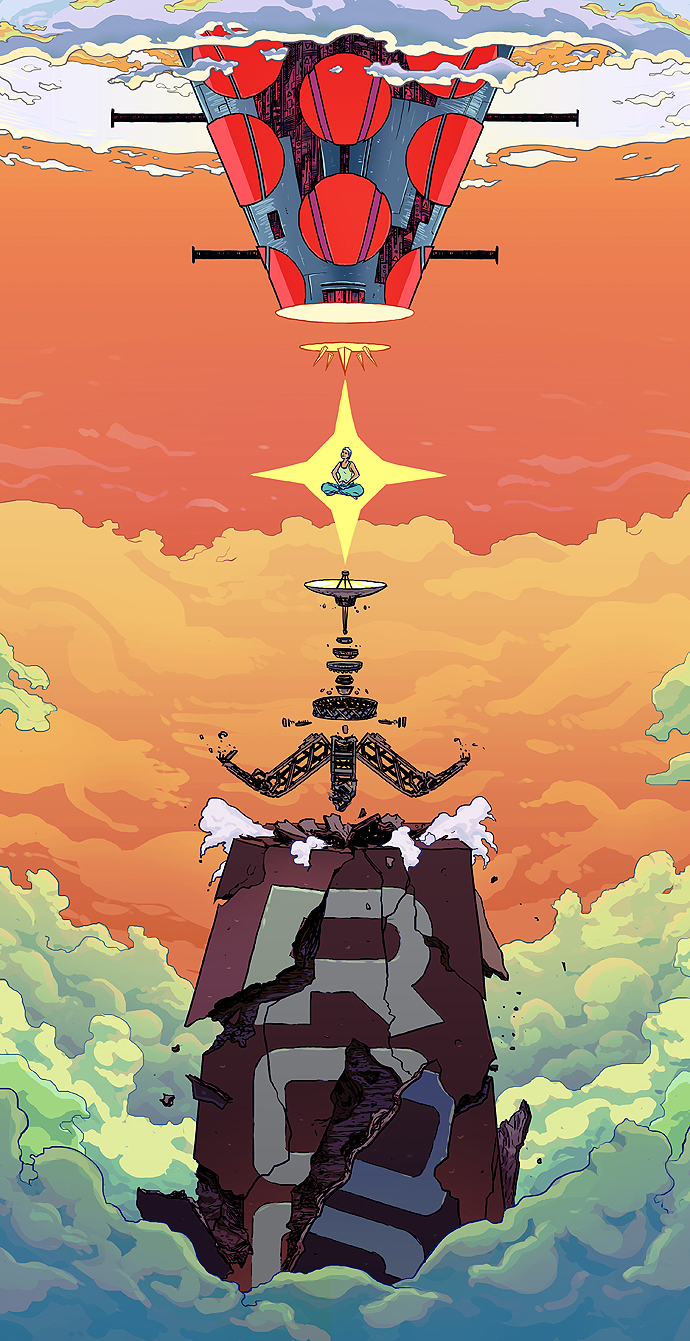 I was pretty gutted when I found out that Moebius had died.  I'd heard back in Angouleme at the beginning of the year that he was critically ill, but I don't think the possibility really hit me that he would ever actually go away!  It's pretty incredible that Moebius was so good, even when his comics didn't make any sense, you could still love them.  I think I read the Incal when I was about 16, but didn't really think about who made it until I went to uni, where me and Phandy would regularly gush over his work, and pretty much have done ever since.

I feel like if life was more like One Piece then Moebius was the King of the Pirates, and now there's an empty seat that everyone should fight to claim.  Moebius wasn't my favourite comic creator, but I feel that if I don't even try and get to his natural level of sincerity and creativity in my work, then I've got the wrong goals in mind!
--

This piece was part of the Electric Ant Zine tribute to Moebius, where we each had a piece of art from a trading card set to base a piece on.  This was mine, and I just got a little carried away with it!  Design wise the ship is a little crude, but at the time I thought that it suited Moebius' design, where sometimes his perspective would be just a little off, or his designs deceptively simple.  This was another piece where the linework was relatively quick, but the colouring took ages!  Also, I've been told that it needs more rubble, which I agree with.  Still, I like it!
Posted by Marcel at 11:15 1 comment:

Crap, it's been a while!  I've actually been arting in the meantime, but completely slipped in my blogging.  I actually feel pretty bad about that...

Anyway!  Here's some work based on Glory, the Image Comics revamp helmed by Ross Campbell and the indefatigable Joe Keatinge.  I haven't met Ross before, but Joe is one of the nicest guys you'll meet, and tries to give everyone a break.  Buy him a drink if you ever meet him!  Brandon Graham et al's Prophet rocks my world too, but Glory just somehow ticks my boxes as a damn good adventure comic.  Just a really violent one!

On to the art: 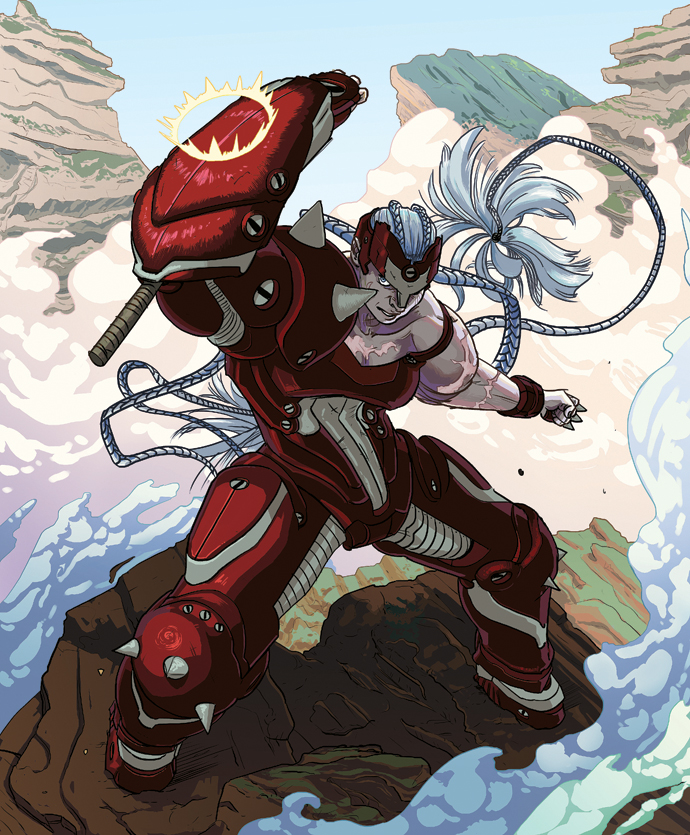 I've been experimenting a little lately with some different techniques in photoshop- I think I spent a little too much time on the above piece  for it to be efficient, but I had damn good fun working on it.  As tends to be the case with me, the linework took no time at all, but the colouring took forever and an age.  This was actually made before the issue where Glory has crazy braids!  But hey, great minds think alike.

The rest of the sketches below were generally made before I'd actually read the comic, which I think you can sort of tell by the slightly different tone to em. 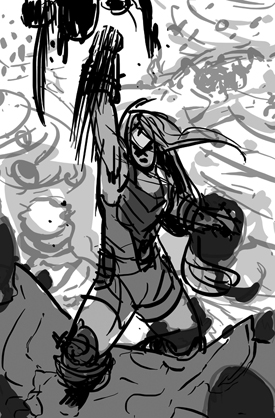 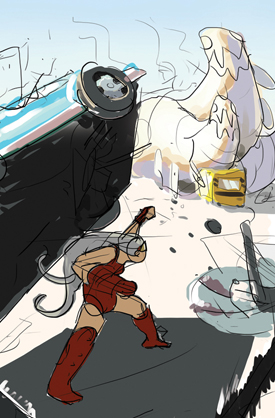 [^ This one I actually really liked, but just couldn't get it to work in a finished piece.  And I just couldn't think of a decent creature design to fit it for the life of me!] 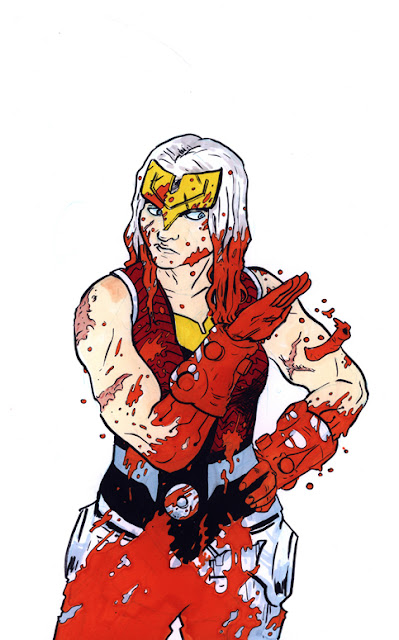 [^ While not intentional at the time, I'm 90% sure the blood on this was inspired by Cory Walker's early Invincible run.  I haven't read that in years, but used to be a fan in my teens] 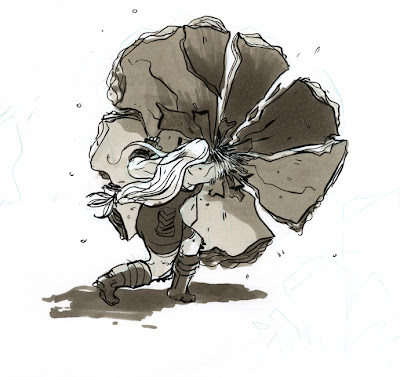 I feel like there should be some kind of link at the end, so whilst we're on the theme of superhuman musclebound women, go see this.

See you next time!

Marcel
Comicker, Illustrator and champion swordfighter. Having lived and studied in Falmouth for three years, I now get to adjust to real life. And TAXES. My goal is to draw fast enough that I actually get to leave the house in the near future. Feel free to contact me at marcelmarcelmarcel@hotmail.co.uk